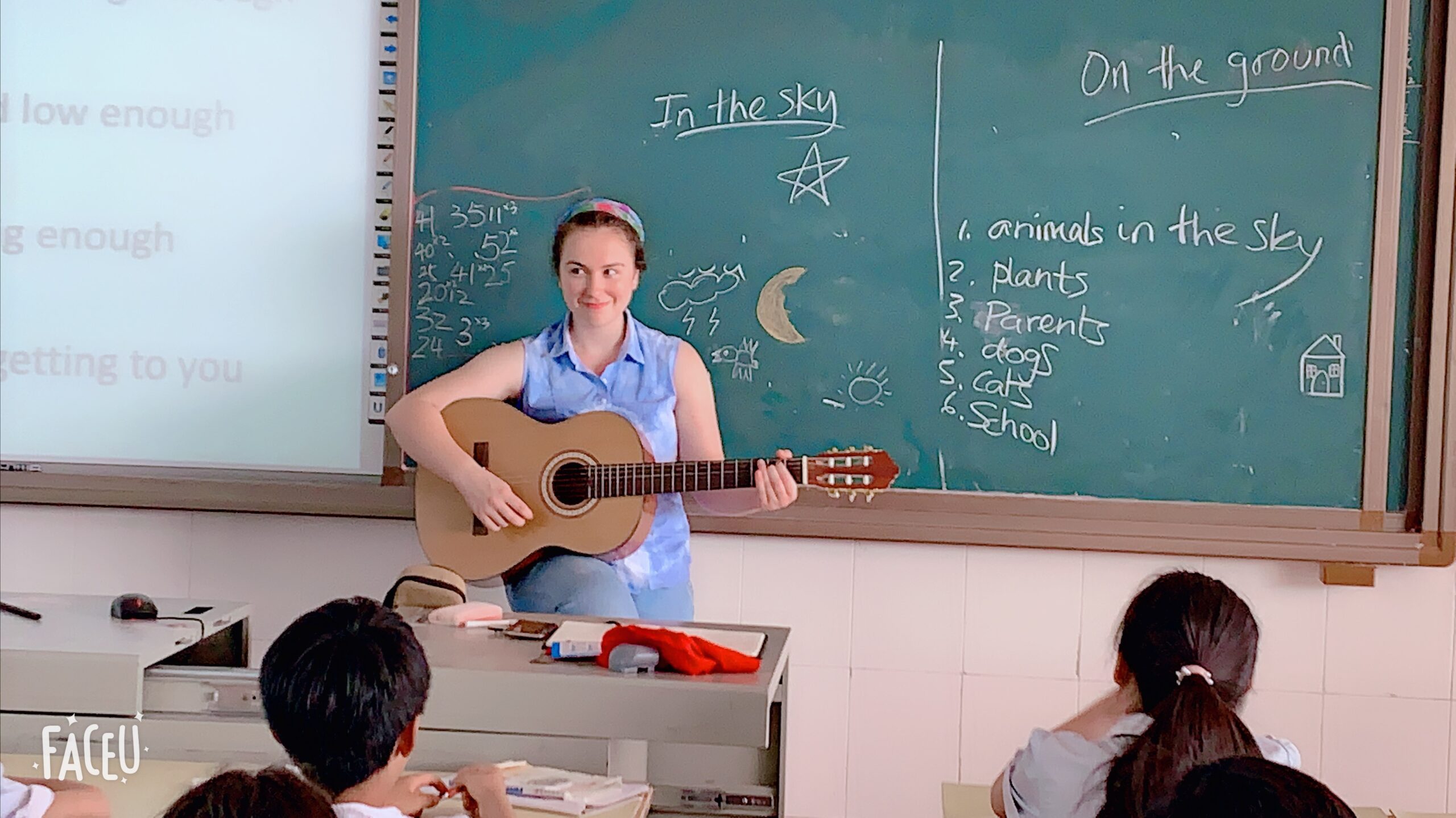 A School Day in China

China is very much in the world’s consciousness at the moment. You can’t open a newspaper or turn on the radio without hearing it mentioned, and often it’s not in favourable terms. There is a mystique around the daily lives of Chinese citizens due to the lack of Chinese media that makes it out, as well as the utterly different cultural landscape that is impossible to explain to someone who’s never been there. This was in my mind when I decided to move to China back in 2018. I wanted to know what it was like to live in a country that was talked about so much, but understood (by the west) very little. In total I was there for two years, one year teaching English in Hunan province, and one year teaching physics and maths in Suzhou, a city near Shanghai.

Working in two different schools, I saw many aspects of school life in China and how they compare to the UK.

The Chinese school day varies by school but in general, students have to be in by 7:30am for ‘form time’ and homework. Classes start at 8:25 and run for 40-45 minutes. As someone used to the UK system of hour-long periods, the short lessons took some time to get used to, but were nice when there was a difficult class. Students and teachers generally eat lunch at 11:30 or even before, and almost always in the school canteen. There were many days when I turned up for lunch at 11:40am and all the food was gone. The canteen food varies hugely by school but most everyone will eat there regardless. It’s not a ‘thing’ to take your own lunch anywhere, as food tends to be very cheap in China and readily available at any workplace or tourist spot.

The lunch break lasts for about two hours, because most people have a post-lunch nap. Lots of schools have dormitories for students and teachers where they can go during this time, but in smaller or less well-off schools, teachers and students will sleep on their desks. In my first year there, I had a dorm in the school, but in my second year, I got used to desk-sleeping. Somehow, when all your colleagues are asleep with their heads down it makes you sleepy too and before I knew it, I was napping most days. The exciting part was waking up and trying to assess the damage done to your neck.

Classes go on until about 5pm, and then students head home. Lots of schools in China are partly boarding and those residential students will have dinner and some free time before night classes from 6pm-9pm when they do their homework. The distinction between boarding and non-boarding schools is not so clear in China. As the cities are so big now and still growing fast, many places that used to be countryside, made of dirt roads with few shops, are being engulfed by the nearest cities. This means that students from those areas have to travel into the city to get to school, sometimes an hour or more’s journey. It wouldn’t be practical for them to go home every day, so if they can afford it, they don’t. As the schools catch up with the rapid growth of cities, the way people access education will likely change. More and better schools will be built in the parts of cities that previously had little infrastructure and as people get wealthier, the demand for a ‘good’ education will increase. 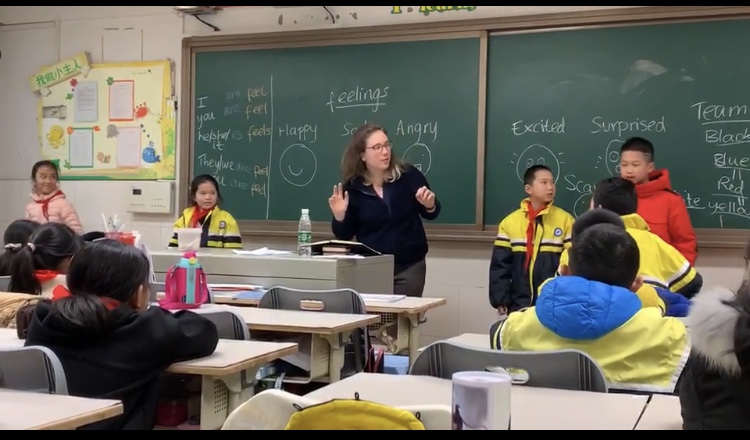 From a teacher’s perspective, the school day looks a bit different. Most teachers have between two and four lessons a day with the same year group but have to be in school from 7:30am-5:30pm. Something that’s important in every area of Chinese working life is ‘face-time’. There is no sense that having to stay for long hours in the office might lead to a decrease in productivity – individuals may think that, but it’s not something that exists in the national thought in China. Teachers fill their time with the huge amounts of marking created by classes of up to 60 students.

It’s standard for young, unmarried teachers to be given the option to live in the school. Often, they will share a room with three other teachers on school grounds. In my school in Hunan, I lived on a corridor perpendicular to a row of classrooms. I had my own apartment because I was a 外教, or foreign teacher. I would be woken up every day at 7:30 by 40 five-year-olds screaming and running down the corridor. Once, when my brother was visiting me, he was sleeping in the living room and hadn’t closed the front door properly. I woke up to find three young children inside my apartment crowded around his sleeping head whispering to each other. They had obviously run past, seen the open door and taken the opportunity.

The school semesters in China look very similar to the those of the US. The year runs from late August until June, and there are two long terms with a winter holiday to break them up. The winter holiday dates are decided by the Spring Festival (known in the UK as Chinese New Year) which changes every year following the lunar calendar, but is generally in January or February. Additionally, everyone gets a week off in October for the ‘national holiday’ and there are various other one day holidays throughout the year. Something which I struggled with at first is the standard practice of working on a weekend to make up for holiday days. During the Dragon Boat Festival for instance, schools are closed for three days, but only one of those days is an actual holiday. The other two days have to be made up by working the following two Sundays, for example. This happens throughout the year and teachers might have to work seven or eight days in a row depending on how the days fall.

Being a foreign teacher in China is an odd experience because people are fascinated by you and so friendly, but at the same time find it difficult to relate to you so it can be lonely. In my city in Hunan, most people had never seen a foreigner in real life before, so I got lots of stares and pointing. Students often didn’t respect me as they did their Chinese teachers, because they knew there wasn’t much I could do to punish them. Their other teachers had their parents on WeChat so could get them into trouble much more easily. It was also because I was speaking in English, which they couldn’t understand at all so it had little meaning for them. English teaching in Chinese state schools is generally very poor, especially outside of the main few cities. There is no emphasis on speaking (although there are talks about changing this) so most students don’t understand that English is a language just like Chinese and can be used to communicate information. It was interesting to compare this to the UK, where language teaching is also extremely poor. Here, it seems that the lack of success stems from the fact that English is an international language, so there’s no motivation for us to learn another. In China, the landscape of English teaching has been utterly transformed in recent years. More and more students study at international schools and go abroad for university. Over the last five years or so, the number of schools hiring foreign teachers to teach English has skyrocketed and it will be interesting to see the effects of this in the coming decade. Conversely, inside the country, things are getting more conservative and it seems ‘opening up’ is a thing of the past. This will have a negative effect on English language learning because mainstream Han Chinese culture is so dominant and leaves no room for any influence from abroad. Global politics will influence language learning too, and what the Chinese government’s long-term plan is is anyone’s guess. The one thing we can be certain of is that they have one.

A School Day in China

February 26, 2021
China is very much in the world’s consciousness at the moment. You can’t open a…
LearningOnlineTeaching

January 28, 2021
EdTech: Digitising Learning According to Promethean’s UK&I State of Technology in Education Report, the use of…
LearningOnlineTeaching

January 26, 2021
Education Horizons Government announcements this week have confirmed what many feared:  formal GCSE and A…
How ToLearningOxbridge

University Admissions in a Pandemic

August 7, 2020
The annual admissions cycle is a well-known process here at Oxford & Cambridge Tutors, and…
Learning

August 7, 2020
Unlocking Student Success: the Key Ingredient A new era in education has arrived: students of…

Close Menu
By continuing to browse tutorzone.oxfordtutors.com or by clicking "Accept and Close", you agree to the use of cookies to enhance your experience on our site and for analytical purposes.
Accept and Close
Manage consent

This website uses cookies to improve your experience while you navigate through the website. Out of these, the cookies that are categorized as necessary are stored on your browser as they are essential for the working of basic functionalities of the website. We also use third-party cookies that help us analyze and understand how you use this website. These cookies will be stored in your browser only with your consent. You also have the option to opt-out of these cookies. But opting out of some of these cookies may affect your browsing experience.
Necessary Always Enabled
Necessary cookies are absolutely essential for the website to function properly. This category only includes cookies that ensures basic functionalities and security features of the website. These cookies do not store any personal information.
Non-necessary
Any cookies that may not be particularly necessary for the website to function and is used specifically to collect user personal data via analytics, ads, other embedded contents are termed as non-necessary cookies. It is mandatory to procure user consent prior to running these cookies on your website.
SAVE & ACCEPT